It's about tamariki. Our tāonga. Protecting future generations. Every time you get in the car.

Choosing to drive smokefree can be tough at first, but honestly it gets easier:

Smoking around children and young people is harmful for their health

Children can’t get away from the smoke in your car. Opening or winding down the window doesn’t remove all the poisons in second-hand smoke. The poisons will stay long after the smoke and smell have disappeared.

There is lots of evidence about the harms of second-hand smoke.

The law and smoking in cars

To limit children’s exposure to second-hand smoke, it is illegal to smoke and vape in a vehicle that has rangatahi and children (under 18years old) in it - whether the vehicle is moving or not.

The Smoke-free Environments (Prohibiting Smoking in Motor Vehicles Carrying Children) Amendment Act was passed in May 2020 and came into force on 28 November 2021. This prohibits smoking and vaping in motor vehicles carrying children and young people under 18 years of age.

Smoking (or vaping) in a vehicle carrying a child occupant may result in the individual being liable for a fine of $50, or a court can impose a fine of up to $100.

Why do we need this law?

Results from the 2018 Youth Insights Survey (nationally representative survey of Year 10 students aged 14 to 15-years old) showed that about 15% of 14 to 15-year-olds were exposed to second-hand smoke in vehicles. Māori and Pacific students reported much higher exposure at 26%. 84

The vast majority of New Zealanders support this law change. About 95% of adults aged 15 years or over (from the 2018 Health Lifestyle Survey) supported banning smoking in cars when children under 18 years are present. And young people support this law too: more than 90% of 14 to 15-year-olds (from the 2018 Youth Insights Survey) agreed we should ban smoking when children are in them. 86

We encourage community groups to join us and share the message of Drive Smokefree for Tamariki by downloading resources to use in your area or sharing the Facebook Posts to your social pages.

If you need support to stop smoking, check out www.quitstrong.org.nz 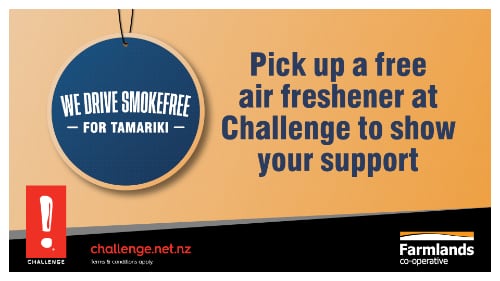